I Know You Are But What Am I? (Part 10 of Cognitive Biases) 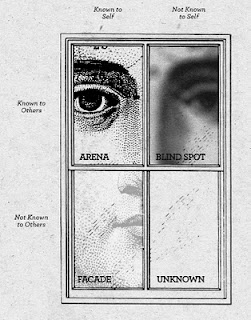 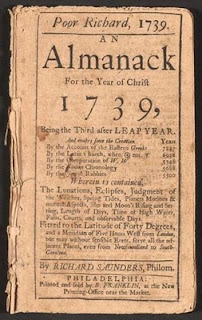 I've been practicing my skills as an aphorist through daily tweets since last August, and I'm grateful for the many insightful responses I've received here, on Twitter, and on Facebook. Herewith a collection of the first 123 of Dobson's Laws, presented in two parts.
Dobson's Laws are copyright © 2010 by Michael Dobson under the terms of the Creative Commons Attribution license.
Career Management and Personal Growth
Your strength in one situation can be a weakness elsewhere. You must know when you're operating out of your vulnerabilities and biases.

Never say it can't be done in a first meeting, no matter how sure you are. People tend to think you aren't even trying.

Sweat key small stuff. There's often something that makes the customer disproportionately happy, and you can always use more good will.

There is no situation so bad that you cannot make it worse.

Your attitude changes the world around you. If you look at the world through rose-colored glasses, it's amazing how often you get roses.

Things are what they are, but that doesn't make you helpless. The world is filled with both opportunity and danger.

Failure can sometimes be turned into success. If Pisa's tower didn't lean, no one would visit it.

Fight the temptation to take on interesting projects that exceed your performance bandwidth.

If you age your work properly, lots of it will turn out to be unnecessary or irrelevant. This is the great secret of time management.

Most of us are not-so-good Samaritans. But being a good neighbor is in your best interest, too. Someday you might be the one in the ditch.

How often do you describe your workplace as a war zone? Taking flak, being shot down, or out for blood...pay attention to violent metaphors.

Faking can be dishonest, but it can also be a form of practice. I've faked liking people so long that now I actually do.

We correlate age with wisdom, but that's wrong. Age provides experience; wisdom is learning from it.
Communications, Cognitive Bias, Perception, Influence
Realism isn't cynicism. A cynic is disappointed that things are what they are. Realists accept the facts and go from there.
When people rate their own decisions as "95% certain," research shows they're wrong approximately 40% of the time.
You have three kinds of blind spots: ones you don't know you have, ones you embrace or accept, and ones you try to overcome.
The fundamental flaw of almost all management thinking is the assumption that we are all rational.
You want someone to know something, to do something, or to feel something - there are no other reasons to communicate.
In English, gratitude and ingratitude are opposites, but flammable and inflammable are synonyms. Language is a leading cause of fires.
When there aren't standards for empirical proof, our common ground turns into scorched earth.
Telling people it's going to be OK often influences the likelihood it will be. That's not lying; it's premature truth-telling.
The customer is always right only at the end of the project, when they decide if they're happy and want to pay you.
Say back to them what they said to you before arguing. Until they hear their words in your mouth, they don't believe you listened.
A customer only needs two qualifications: a need, and the wherewithal to pay for it. You have to figure out the rest and then supply it.
Every communications medium has some special virtue nothing else can replace. After 6,000 years, we still chisel some messages into stone.
In the South, an honest politician is one who stays bought. But real politicians are always dependable. Their word is their stock in trade.
Seminars on dealing with difficult people are mostly filled with difficult people. Try looking in the mirror.
Jokes reveal pain and offer insight. Read the cartoons people tape to cubicle walls. They're often cries for help.
Creative Thinking, Problem Solving, Decision-Making
What do you know now that you wish you had known earlier? You can't replay the past, but the lesson might be useful in the future?
Failure is essential to all creative endeavors. Learn to fail early, fail often, and fail cheaply.
What's half of thirteen? A mathematician would say 6.5, but a graphic designer might say "thir" or "teen." The answer depends on the goal.
There's always a question that will illuminate key problems if asked early enough. Try on lots of questions to find the right one.
Fortunately, doing the right thing and the smart thing are usually the same thing. Ethics and self-interest often go hand-in-hand.
An often overlooked way to overcome procrastination: delegation. Is there some way you can get someone else to do it for you?
You are not there to do what the customer (or your boss) says. You're there to do what your he or she *wants.* They aren't always identical.
Real life seldom conforms to the clean, crisp edges of a model. Models are useful, but don't confuse the map with the territory.
Always identify the "good enough" point, even if you don't settle for it. How can you exceed expectations if you don't know what they are?
There are two ways to learn from experience: Have an experience, learn. Or find someone else who's had the experience and learn from that.
SideWise Thinkers know that reality is nuanced and complex. Beware the person who claims to explain it all in 140 characters.
"Known knowns, known unknowns, unknown unknowns." Rumsfeld missed one: unknown knowns, things to which our perceptual biases blind us.
You don't procrastinate because you're a "procrastinator," you procrastinate for a reason. Knowing why is essential to overcoming the block.
Creativity trainers mostly teach you how to generate ideas. Useful, but inspiration's only 1%. The rest (the hard part) is follow through.
The Godzilla Principle: Baby monsters are easier to kill than the full-grown variety. Some solutions come with expiration dates.
If a job's worth doing, it's worth doing badly. That's why we practice what we care about: we start bad, then work up.
Models aren't true or false; they're useful or not useful. A map of Chicago may well be accurate, but in New York City it's not very useful.
Inertia, friction, and entropy are universal: they affect people and organizations as well as physical objects.
Think "both-and" instead of "either-or." People want seemingly opposite things all the time. Often, they achieve them.
Friends and Enemies
Map the political environment around you by identifying allies, opponents, neutrals, fellow travelers, and enemies.
Two factors determine how people treat you: (a) the quality of the relationship and (b) the degree of common interest.
Allies have common interests and a good relationship, so they tend to win when you win. Use them wisely.
Opponents have conflicting interests, but a good relationship. They're valuable; always treat them with respect and fairness.
Fellow travelers have a common interest but a poor relationship. Trust them only as far as their own self-interest takes them.
Enemies have conflicting interests and a poor relationship. Negotiate interests in the short term; build relationships over time.
Neutrals shade in all four directions. Some are best left on the fence; others need to be lured into the game.
Posted by Michael Dobson at 6:23 PM No comments:

Do, Know, Feel: The Goals of Communication 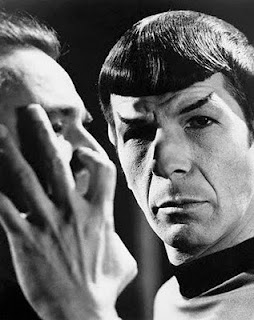 Why do we communicate? The simple reason is because we don’t do the Vulcan Mind Meld very well. We cannot know directly the thoughts in someone else’s head, nor transmit our thoughts to them. As a result, we have to go through a fairly complex process to get our messages across.
Dr. Albert Mehrabian, in his groundbreaking book Silent Messages (1971), concluded that tone of voice and facial expression are how feelings and attitudes get communicated (often cited as the 7% word/38% voice/55% expression rule). When the tone of voice or facial expression is in conflict (“This soup is really delicious,” said with a sour look on your face), people tend to believe tonality and facial expression conveys the deeper truth.
Added to the problem of decoding is stereotyping and prejudice. If you have a preexisting idea about an individual or a group, you naturally tend to use that idea as a filter. Race, religion, ethnicity, accent, political orientation, sexual orientation, career — any difference that people notice affects out they interpret what you say.
Because communication is an artificial process, it’s not a good idea to assume your message has gotten across unless you’ve done it right. That means you need a measure of success. How do you know if you’ve communicated effectively?
Well, in project management, success gets benchmarked against your goal. Did you accomplish what you set out to accomplish, and did the underlying problem or issue get solved? These aren’t automatically the same thing, as we all know. Sometimes we communicate our hurt feelings and anger with remarkable effectiveness — but the ultimate outcome may not be to our liking.
The way to think about communication, therefore, is to start with the goal and work backward to the technique. With that in mind, here's the key question: Why are you communicating? On inspection, there turn out to be three goals.
Do. Know. Feel. That’s it. That’s why we communicate. These three goals often interact, of course — the process of getting someone to take some action may sometimes involve conveying information along with persuasion.
Start every communication by thinking about the outcome. What is it that you want to happen with the other person – do, know, feel?
Often, simply thinking clearly about what you want is enough all by itself to show you the way. And when it isn’t, then you know it’s clearly worth some effort to map out a plan. There are great tools available — if you know you've got a problem.
Posted by Michael Dobson at 8:28 AM No comments:

You're Not Being Reasonable! 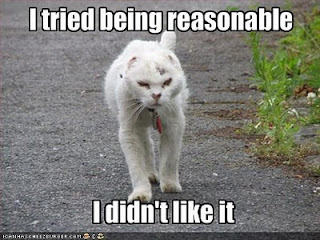