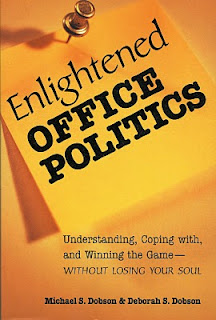 “Politics, n.  A strife of interests masquerading as a contest of principles.”

Take this test to see if you have office politics in your organization.

3)  If the answer to #2 is “Yes,” you definitely have office politics.


Most definitions of politics (or of any controversial topic, for that matter) reflect the moral outlook of the definer.  The American Heritage Dictionary, for example, describes a politician as “one who is interested in personal or partisan gain and other selfish interests” and politics as “partisan or factional intrigue within a given group.”  But the root word “politic, ” from Chambers Concise 20th Century Dictionary, means “in accordance with good policy:  acting or proceeding from motives of policy:  prudent: discreet.”


Consider these truisms about people and organizations:


There’s nothing very radical, nor inherently unprincipled or evil, in these statements; most people will easily acknowledge their truth:  that people don’t check their humanity at the door when they punch in on the time clock.

The second truism to consider is the concept of scarcity.  From the days of the pyramids to the present, every organization, company, or government has lived with the reality that there are far more desirable projects and activities than there are resources to manage them.  In other words, work is infinite but resources are finite.

Every time senior management gives you a dollar, or a person, or a week, it becomes a dollar, a person, or a week they can’t give to someone else for something that also has value.  (In financial terms, this is known as “opportunity cost.”)  That sets up an unavoidable competition, as we each strive to get the resources we need to accomplish our objectives, and the playing out of the informal competition is what we know as office politics.  And if our organization is under stress or financial challenge, the struggle gets that much worse.

It also gets worse when what’s at stake is competition for access to status, which is also a kind of limited resource.  For most people, when their personal status is at stake, the kid gloves come off.

This leads us to the following operational definition of politics:

Politics (\ˈpä-lə-ˌtiks\):  The informal and sometimes emotion-driven process of allocating limited resources and working out goals, decisions, and actions in an environment of people with different and competing interests and personalities.

This definition is intentionally neutral, as simply descriptive as we can make it.  It helps us understand what we’re about.  Here are the key points of this definition amplified:

There's no point in getting too wrapped up about the negative side of politics; it's inevitable wherever human beings gather together. Instead, it's better to learn how to play in a principled, positive, and above all effective manner. 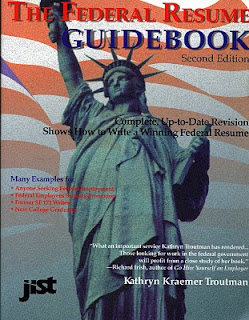 Today's SideWise Insight is a reminder that in uncertain times, it's always wise to "career-proof" your job environment. This piece is focused on Federal employees, but there's good advice here no matter what field you're in.

In the career services field, it’s not uncommon to meet people who haven’t looked for a job in literally decades. They are long out of practice, their skills are rusty, and it’s often a desperate job situation that has driven them to this extreme.  Such people often have a difficult time in career transitions, even though they often have tremendous skills and experience to offer.

A job isn’t a marriage, so continuing to date a little on the side isn’t cheating.  The job, let us note, has not made a marriage commitment to you.  It is a professional relationship that may be very pleasant and very successful, but it is situational and capable of being set aside by either party in the event circumstances change.

Job hunting is not just the narrow activity of sending out résumés in response to vacancy announcements and going on interviews when asked.  After all, at certain points in your career, you may not actually want another job.  Should you still job-hunt?  Absolutely yes, although the job-hunting activities a career-proofing strategist uses in such a case may be different.  You don’t want to be caught unprepared in case of an emergency, and you don’t want to miss that perfect opportunity when it reveals itself.

Keep up with the market.  Whether you are actively seeking a new position or not, you should always stay up to date with what’s actually going on in your field, in your agency, in your market, in your private sector equivalent, and in other agencies that employ similar specialists.  What newspapers or newsletters cover your areas?  What websites or professional organizations or other resources can you follow that will give you the news?

Check whether Federal publications are released covering agencies and programs that concern you.  Monitor Congressional committees whose work impacts your agencies or programs.  Which lobbying groups or public interest groups focus on issues that have an impact on your field?  (Don’t only study the side with which you may sympathize; learn about the other side(s) as well.)

Remember that “lunch is a verb,” and use some of your lunch hours as networking opportunities.  Try to expand the number of people with whom you lunch at least occasionally just to trade general gossip about what’s going on.  While you don’t share confidential information, of course, there’s a great deal of general information that can be shared quite appropriately.

As you develop your sources and your network, you’ll find yourself increasingly in demand as someone “in the know,” and knowledge is an important ingredient in practical political power.  What is most interesting is how it makes you more effective at your job and in your organization as well.  In-the-know people understand the bigger picture.  They tend to have influence.  They can get things done.  They often panic less when bad news (or bad rumors) happen.  And valuable news sources are valuable to their bosses and others in the organizational hierarchy.

Why We Work With Jerks 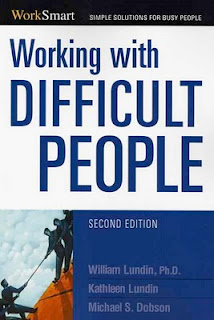 BRITANNUS (shocked). “Caesar, this is not proper.”
THEODOTUS (outraged). “How!”
CAESAR (recovering his self-possession). “Pardon him, Theodotus: he is a barbarian, and thinks the customs of his tribe and island are the laws of nature.”
— George Bernard Shaw, Caesar and Cleopatra, Act II, (1900)
If you're surrounded by difficult people, you may wonder why the organization doesn't take more of a lead in dealing with difficult people in its midst?
Surely the costs of inappropriate behavior should compel the organization to action—and yet it’s seldom the case that the organization acts except in the most egregious of situations.
Sometimes it’s because the organization itself is part of the problem.
You may have noticed that a lot of people describe their office environment as if it’s a war zone. We take flak, someone gets shot down, the boss is out for blood, someone’s getting the ax—it’s a pretty violent place. And, of course, some people work in offices that are all too reminiscent of a war zone.
There’s the official corporate culture and the real culture. The official culture is usually embodied in a vision or mission statement: “We value honesty, diversity, and hard work.” If in fact people are praised and rewarded for honesty, diversity, and hard work, then the match between the official culture and the real culture is close.
But sometimes there’s a mismatch. If honesty is punished, diversity nonexistent, and nepotism is rampant, then the official culture isn’t real. You often still need to give lip service to the official version, but the real culture is reflected in the behavior you actually witness day in and day out.
Look at the very top of the organization. Does verbal abuse start there and go down through the ranks? If so, it’s hardly surprising to see the same behavior reflected in middle managers.
If you are part of an organization whose culture rewards difficult behavior, your attempts to modify the behavior will be less effective, and may not work at all.
If that’s the case, your options are limited. Depending on your organizational rank and power, you may be able to force a change in the corporate culture.
If the difficult behavior violates laws against harassment and discrimination, you may be able to force change even if you’re in a lower-ranking position. Be extremely careful with the threat of legal pressure. Even if you succeed in forcing the organizational change, you may suffer negative career consequences. It’s all too common for other people—not you—to reap the benefit for such a sacrifice.
If you can’t change the culture, or the cost of forcing change is unacceptable, the two remaining choices are (a) learn to live with it and (b) get out. If your decision is to leave, prepare your exit carefully. If you’re going to stay, make sure the consequences to your mental health and happiness are within an acceptable range.
One word of caution: If you’ve generally had good working relationships and this job is poisonous, it’s probably them.
If, on the other hand, you encounter the same difficult behavior over and over again, it’s probably you.
From: Work Smart: Dealing With Difficult People (2nd ed.), William Lundin, Ph.D., Kathleen Lundin, and Michael S. Dobson (AMACOM, 2009)
Posted by Michael Dobson at 6:00 AM No comments: 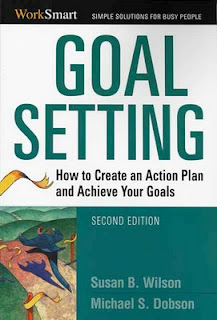 Ever met an unmotivated person?
Think again. If someone spends more time and energy each day scheming to get out of work, they're motivated, all right. Just not in the direction you would prefer.
If someone isn’t helping you to achieve your goals, there are three possible reasons.
a) Ignorance: They don’t know what you want.
b) Inability: They can’t do what you want.
c) Choice: They won’t do what you want.
Ignorance. If people don’t know what you want, the problem isn’t with them; it’s with you. Even if you know you’ve told them, don’t assume the message has really gotten across. You may not have been as clear as you could have been, and they may not have been listening as well as they might have. It's always a good idea to check to make sure people really do know what you want. If that's the only thing standing in the way of their action, you're done.
Inability. When we say “can’t do,” it’s a literal “can’t do”: if we offered a million dollar bounty, nothing would change. “Can’t do” situations can sometimes be fixed by training, by access to necessary resources, by going to a different person, or by altering your request. There’s nothing personal here, but merely a problem. You can fix it or you can’t.
Choice. If someone knows what you want and can do it, then they get to make a choice about whether to do it. Why would they choose not to do it? Again, three reasons:
a) Performance is punished
b) Failure is rewarded
c) Performance doesn’t matter
Watch out for “perverse incentives,” ways in which we inadvertently push people in the direction of the very behavior we want them to avoid. If you get rewarded for doing a great job with even more work, perhaps that great job isn’t completely in your own interest. If failure to exceed your quota for the month gets you better liked by your colleagues, and there’s not much consequence from management, failure may give you the greatest personal reward. If you think no one reads or cares about that weekly report, it doesn’t seem to matter much if you do it well or poorly.
When you’re in a leadership role or simply need help and cooperation from your colleagues, try to find out why they’re behaving as they do. If you know whether their behavior is a choice or not, you can pick the best strategy for getting results.
From Work Smart: Goal Setting (2nd edition), by Susan B. Wilson and Michael Dobson.
Posted by Michael Dobson at 4:16 PM No comments: