Propositional fallacies involve fallacies of mathematical reasoning. They are fallacious regardless of the truth value of the component statements. Last time, we discussed affirming a disjunct, the fallacy of turning an inclusive OR into an exclusive one. The two remaining propositional fallacies are known as affirming the consequent and denying the antecedent.

Here's how to cast the argument in propositional calculus:

The opposite fallacy, denying the antecedent, is also known as inverse error.

In propositional calculus, this takes the form:

If P, then Q. P is false (not-P). Therefore, Q is false (not-Q). As in the previous case, the rules for if and only if are different from if alone.

Posted by Michael Dobson at 4:00 AM No comments:

The Seven Deadly Sins — and Where To Find Them

Researchers at Kansas State University decided to create a series of county-by-county maps of the United States showing the relative distribution of the Seven Deadly Sins (Envy, Greed, Wrath, Sloth, Gluttony, Lust, and Pride). For each sin, they identified a measurable criterion that could serve as a stand-in, and mapped the results showing the deviation from the norm expressed in terms of the standard deviation (σ). Measures from -1.65σ to + 1.65σ are normal; lower levels shade toward the blue and higher levels toward the red.

It's very easy to critique the criteria used for each sin, or to suggest alternative metrics, but I thought it was quite interesting nonetheless. You can learn more about the project and the researchers here, starting on page 8 of the PDF.

Metric: Average income compared with the number of people living below the poverty line.

Metric: Expenditures on art, entertainment, and recreation compared with employment.

Metric: Aggregate of the other six offenses — because pride, as they say, is the root of all sin.

Posted by Michael Dobson at 5:15 PM No comments: 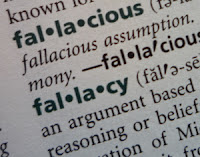 Of course, maybe it is raining here or it isn’t; maybe it’s raining at your house and maybe it isn’t. Because the individual statements can be true or false, we can prepare a truth table.

With and as a connector, the proposition P⋀Q is only true if both statements are true.

The connector OR (represented as “⋁”), on the other hand, makes the proposition true as long as at least one of the statements are true. “It is raining here now OR it is raining where you are now” results in the following truth table.

Notice that OR is used here inclusively rather than exclusively. That is, P doesn’t exclude Q from being true. If it’s raining at my house, that doesn’t mean it’s not raining at yours.

Given the idea of propositional logic, it's easy to conclude that there are fallacies to go with it. The first of these is known as affirming a disjunct.

In our symbolic structure, that gets represented as the following argument (with “therefore” represented by ∴).

That’s a fallacy because it could be raining both places. One doesn’t preclude the other.

While OR in logic always means an inclusive “or,” that doesn’t mean you don’t sometimes want to be more concrete. The logical operator XOR is an exclusive or. When you use it, you’re saying “one or the other, but not both.” The symbol for that is ⊻.

Posted by Michael Dobson at 7:26 AM No comments:

Who Was That Masked Man? (Formal Fallacies Part 3) 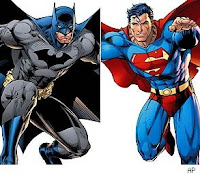 Formal fallacies are arguments that are always wrong, regardless whether the argument's premises (statements claimed as fact) are true or false. For example, in the appeal to probability, someone makes a claim that because something could happen, therefore it will happen. That’s false even if it's true that the something in question could indeed happen.

I know who Bruce Wayne is.

I do not know who Batman is.

Therefore, Bruce Wayne is not Batman.

In the masked man fallacy, a substitution of identical designators in a true statement can lead to a false one. The statement "I do not know who Batman is" gets treated as if it excludes Bruce Wayne simply because I do know who he is. Of course, as long as I don’t know that Bruce is actually Batman, both statements can be absolutely true, and yet the conclusion does not follow logically.

The general form of the argument is:

A similar argument, however, is valid.

Batman is not Superman (Y is not Z).

Therefore, Clark Kent is not Batman (therefore, X is not Y).

Posted by Michael Dobson at 9:17 AM No comments: