Are You a Good Witch or a Bad Witch? (Part 15 of Cognitive Biases) 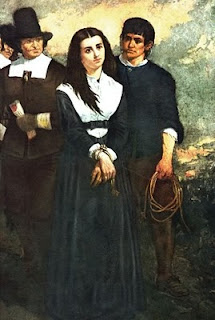 After a long hiatus while we renovated our house, our survey of cognitive biases continues with Pr-Pu. In this installment, we'll learn about projection bias, the pseudocertainty effect, and publication bias. Next week will be brought to you by the lettter "R."

Sigmund Freud named this bias, a psychological defense mechanism in which we unconsciously deny our own attributes, thoughts, or emotions and ascribe them to the outside world, whether to other people or to phenomena like the weather…or in one famous case, witches.

Projection bias is one of the medical explanations of bewitchment that attempts to diagnose the behavior of the afflicted children at Salem in 1692. The historian John Demos asserts that the symptoms of bewitchment experienced by the afflicted girls in Salem during the witchcraft crisis were because the girls were undergoing psychological projection. Demos argues the girls had convulsive fits caused by repressed aggression and were able to project this aggression without blame because of the speculation of witchcraft and bewitchment.

The Salem Witch Trials affected a community under considerable strife: property lines, grazing rights, and upheavals in the church had all given Salem Village a reputation as quarrelsome. Population pressures from increasing family size built demand for farmland. And in the Puritan culture, anything from loss of crops or livestock, illness or death of children, and even bad weather were generally seen as the wrath of God in action.

The Salem witches were hardly the first accused witches in the area. Making ccusations of witchcraft against widowed or orphaned land-owning women was a good way to take their land. And, of course, witches served as a good target for the projection bias: all the ill feelings and bad conduct of the community were projected onto a group that couldn’t fight back.

Which of the following options do you prefer?

You have to make your choice before the first stage.

Here's how most people choose:

If the probability of winning money is the same, why do people choose differently? The answer is the pseudocertainty effect: the tendency to perceive an outcome as if it is certain when it’s actually uncertain. It’s most easily observed in multi-stage decisions like the second problem.
In the second problem, since individuals have no choice on options in the first stage, individuals tend to discard the first stage (75% chance of winning nothing), and only consider the second, where there’s a choice.

The publication bias is, simply, that positive results are more likely to get published than negative ones. This is also known as the file drawer problem: many studies in a given area of research are conducted but never reported, and those that are not reported may on average report different results from those that are reported. Even a small number of studies lost "in the file drawer" can result in a significant bias.

The effect is compounded with meta-analyses and systematic reviews, which often form the basis for evidence-based medicine, and is further complicated when some of the research is sponsored by people and companies with a financial interest in positive results.

According to researcher John Ioannidis, negative papers are most likely to be suppressed:

• when the studies conducted in a field are smaller
• when effect sizes are smaller
• when there is a greater number and lesser preselection of tested relationships
• where there is greater flexibility in designs, definitions, outcomes, and analytical modes
• when there is greater financial and other interest and prejudice
• when more teams are involved in a scientific field in chase of statistical significance.

Ioannidis observes that "claimed research findings may often be simply accurate measures of the prevailing bias.” In an effort to decrease this problem some prominent medical journals, starting in 2004, began requiring registration of a trial before it commences so that unfavorable results are not withheld from publication.